Nattu Kaka of Taarak Mehta Ka Ooltah Chashmah i.e. actor Ghanshyam Nayak has passed away. He was suffering from cancer for several months. He had also had two operations a few months back.

He was 77 years old. Due to age, he could not go to the shooting daily. But he was still a part of Taarak Mehta’s team. Last year, he also had an operation in this connection. But he could not recover from cancer and passed away.

Veteran actor Ghanshyam Nayak, fondly known for playing the role of Nattu Kaka in Sony SAB’s ‘Taarak Mehta Ka Ooltah Chashmah’ is no more. The talented artist passed away on Sunday (October 3) in Mumbai. He was 77. 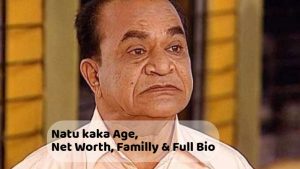 Ghanshyam took his last breath at Mumbai’s Suchak Hospital at around 5:30 pm on Sunday. Last year, the senior actor underwent surgery after eight knots were found in his neck. He had started taking chemotherapy sessions after getting diagnosed with cancer.

The news of Ghanshyam’s death was shared by Taarak Mehta Ka Ooltah Chashmah producer Asit Kumarr Modi, who tweeted, “Hamare pyaare #Natukaka @TMKOC_NTF hamare saath nahi rahe (Our beloved Nattu Kaka is no more).” Asit also wished for Ghanshyam’s family to have the strength to deal with the loss and said that Nattu Kaka will never be forgotten.

Conclusion:
All the information has been collected from a variant of sources that we declared. We tried to help you by representing this information. Thanks for staying with us.